Ronda Rousey is one of the most popular and successful female sports stars in history, especially when it comes to martial arts. As a child, she started Judo training under her mother and eventually, won a bronze medal at the 2008 Summer Olympics which makes her the first-ever American female athlete to win an Olympic medal in Judo. Subsequent to that, she transitioned towards mixed martial arts (MMA) and just like Judo, went on to earn an exponential level of success. After debuting in 2010, she went on to compile a highly decorated MMA career which saw her become the last Strikeforce Women’s Bantamweight Champion and then the inaugural UFC Women’s Bantamweight Champion. Her achievements in the sport are widely admired and many even credit her for bringing women’s MMA into the spotlight worldwide. After her departure from the MMA, Ronda signed a contract with WWE and started her professional wrestling career. During her time with WWE, she briefly held the Raw Women’s Championship and also headlined the first-ever women’s WrestleMania main event.

Because of her involvement in such rough-and-tough sports, Ronda Rousey has never remained a big fan of makeup. She prefers to keep her entire attention towards performing well in her fights/ matches and not to be distracted by the desire of having a perfect look all the time. While she does sports a glamourous look while attending various events, her routine life includes minimal usage of cosmetic products. So for all her fans, below we have compiled 10 Ronda Rousey no-makeup pictures from various occasions when she was seen with a completely natural look. 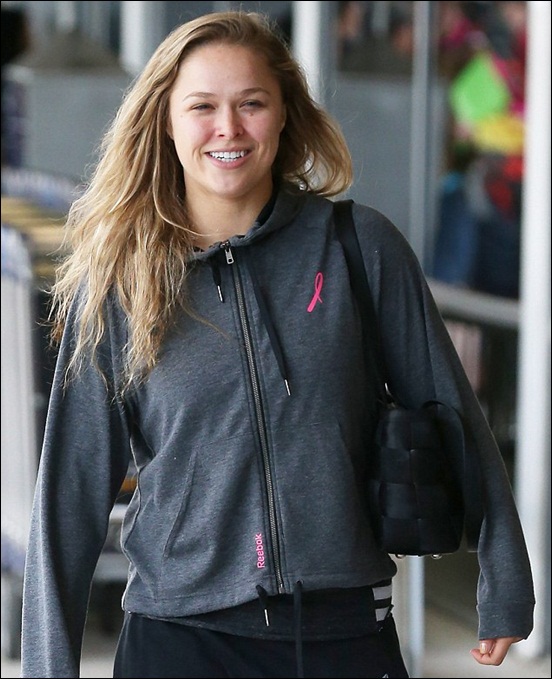 In this picture, Ronda is seen in her casual outfit while out for some shopping. She is totally makeup-free and smiling as she doesn’t even apply an inch of makeup on her skin. Despite that, she is still looking beautiful and happy.

Casually roaming with her friend: 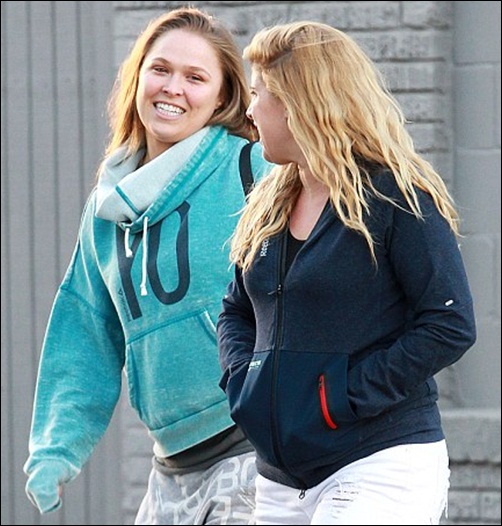 In this photo, Rousey is seen with her friend and seems quite happy. It seems like they are out for some walk or jog. Again her face is totally clear with no makeup at all but still looks gorgeous with that laugh.

Chilling with her husband: 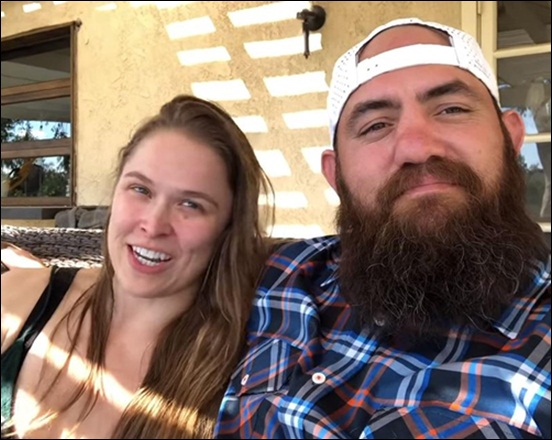 This selfie is taken by Rousey’s husband while they were enjoying their free time together. Their smiles tell the story of how happy they are together. Rousey is not very fond of makeup as she likes to enjoy her real life in a no-makeup look. She is the perfect example for many stars who always remain in makeup.

A happy moment in the UFC ring: 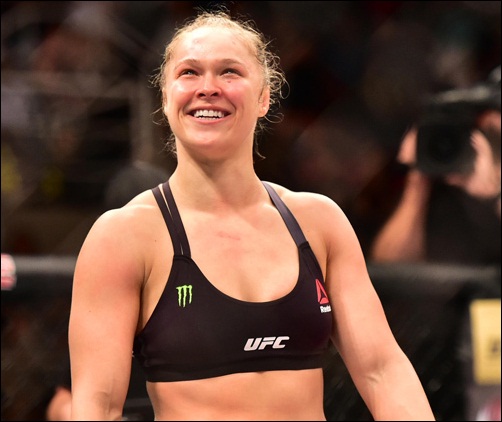 This is one of her happiest moments inside the UFC octagon. She just defeated an opponent and is now smiling to showcase her happiness. In her fighting look, her hair is casually tied in a bun and her skin is totally free of makeup. As her complexion is so fair she doesn’t need much makeup at all to look good.

Happy while out for shopping: 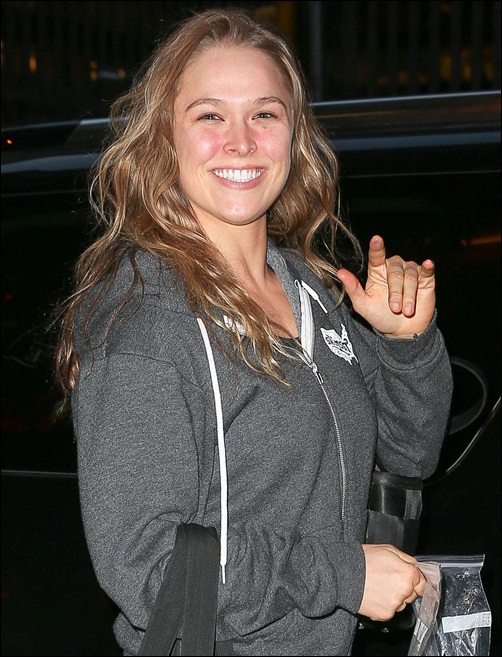 Again Ronda is seen outing in a casual outfit. Just like most routine life occasions, she is makeup-free and still looks good. Her beautiful smile is the only thing she needs to look fabulous.

Looking naturally beautiful on her outing: 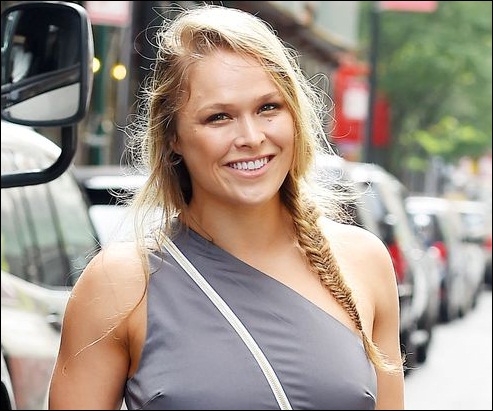 As in this picture, Ronda is seen formally dressed up for going somewhere and her hair tied in a loose side braid. She is looking awesome without any kind of makeup applied on her face but just a little glossy lips. 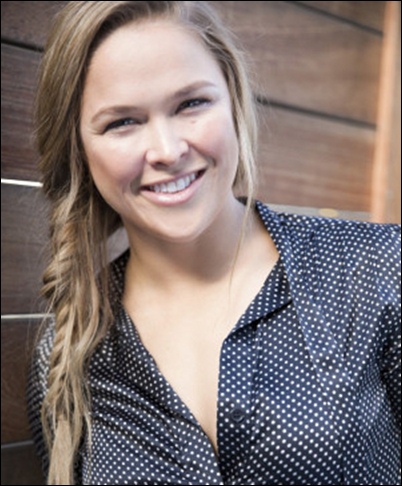 In this selfie, Rousey is in her night suit seems like she is ready to go for her bedtime. Her side braid suits her a lot and she is looking ravishing even in this no-makeup look. She hasn’t used any cosmetics at all but still, her skin is looking so fresh and healthy. 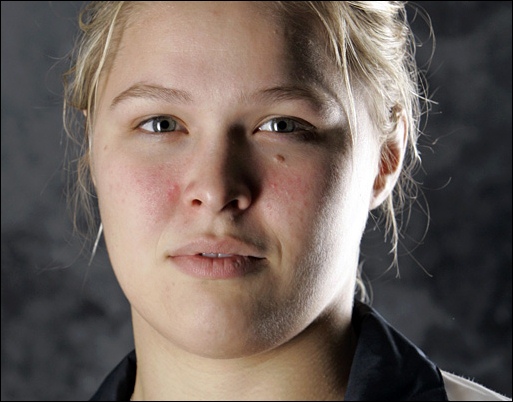 This picture is captured during a shoot for a fight. Here she hasn’t applied any makeup on her skin because she is confident about her natural face. Her eyes are shining like a star and her hair is tied in a casual bun. I must say, she looks mesmerizing.

Rousey’s casual look at the airport: 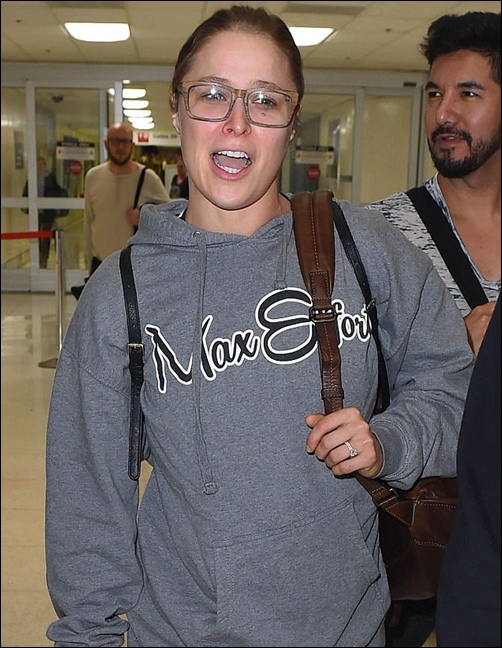 This is her airport look where she is seen with friends. Again, her airport look is also very casual as she wears upper and jeans with big glasses on her face. Just like all other routine life activities, she prefers to travel without makeup as well.

Selfie in the hat: 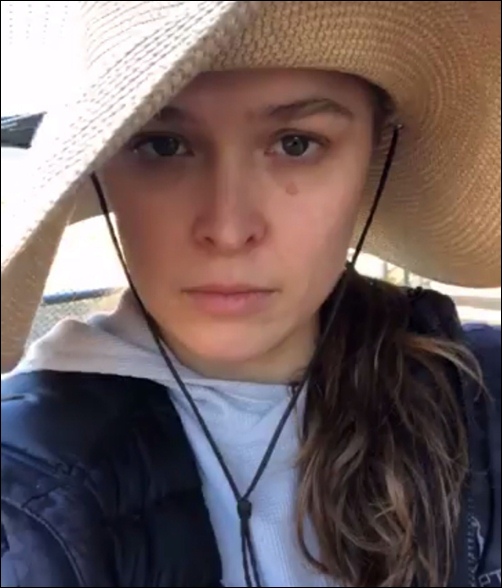 In this photo, Ronda Rousey is looking quite different and very young with the hat on her head. She is looking gorgeous with her zero makeup face and beautiful broad eyes. Although her look in this photo is very serious unlike her previous pictures but still looks marvelous.