Kaley Cuoco first entered the on-screen industry in the 90s and after a series of minor gigs, she first came into the limelight with her role in the television series 8 Simple Rules. From that point onwards, her career took-off rapidly and she has now become one of the leading female stars of the American entertainment industry. From 2007 to 2019, she starred as Penny on the highly successful TV series The Big Bang Theory which has turned her into a household name worldwide. Alongside TV, Kaley is a well-established big-screen artist too. Over the years, she has starred in numerous hit projects, including the films like The Penthouse, Hop, and The Wedding Ringer.

As she is very conscious about her on-screen and off-screen look so she cares a lot about her skin and beauty. As on most occasions,  she is seen in full makeup so it’s very rare to find her makeup-free look. So for her fans, we have compiled some rare Kaley Cuoco no-makeup photos that reveal her casual routine life look.

Kaley Cuoco No Makeup Photos: How She Looks Makeup-Free? 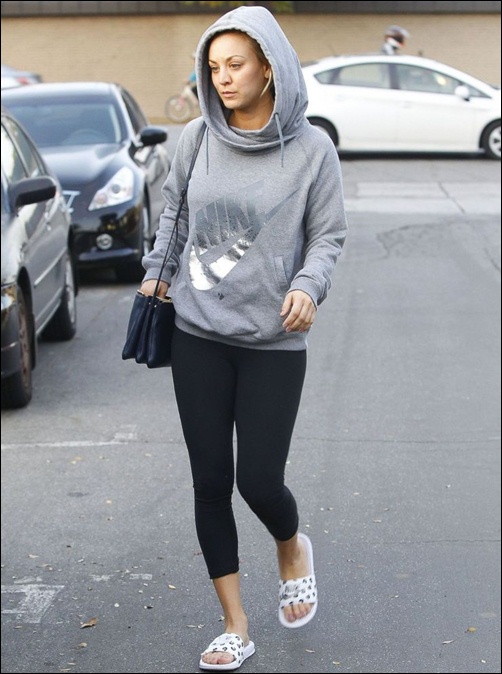 In this photo, Kaley is walking on the road while she was out for some casual work. She is looking comfy in her casual look with upper, tights, and sleepers with a hoodie. Her face is totally cleared from any type of makeup here and rocks the look completely.

Fun time at the mall: 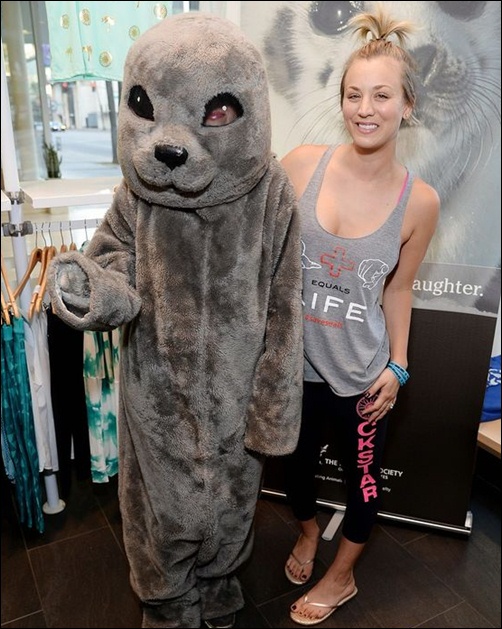 Here Kaley is seen posing with an artificial seal at a mall. Again her get-up is full casual and her hair is tied in a pony. It looks like she was out for some shopping and enjoying her time. She is shopping with her bared face and has no issues while going out with no makeup at all.

Going somewhere while busy on her phone: 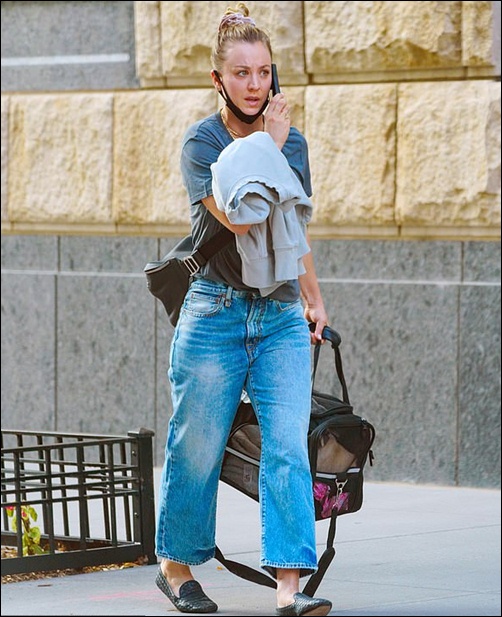 In this random click, she is walking with luggage bags in her hand. Her packing indicates that she is going out on a long journey. This Hollywood actress has a very busy schedule so has to travel and talk on the phone simultaneously. 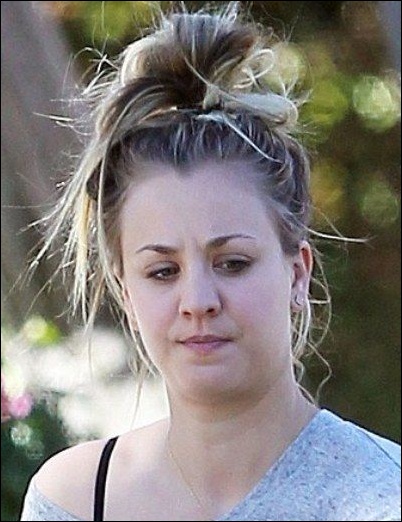 Although Kaley likes to use makeup for on-screen work, she does not wear much makeup in her regular life. She is not much conscious about her makeup during her free time. Like here, she is in her natural without makeup look and still looks beautiful. 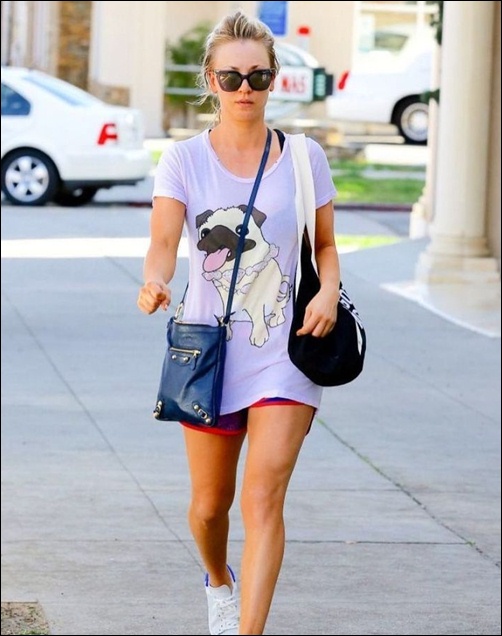 It seems like Cuoco is going for some workout at the gym. She does not care about her makeup look all the time as she is seen here makeup-free while wearing goggles. She is looking very cool and smart in this look. 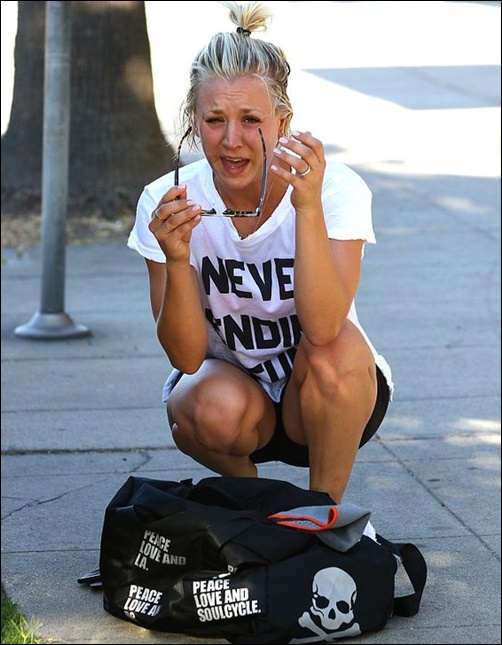 Here, Kaley is captured in an odd-looking situation where she is sitting on the road. This picture was taken at an odd time when she was not even ready for the camera. Despite the whole random situation, her no-makeup look is quite refreshing.

No makeup picture of Kaley: 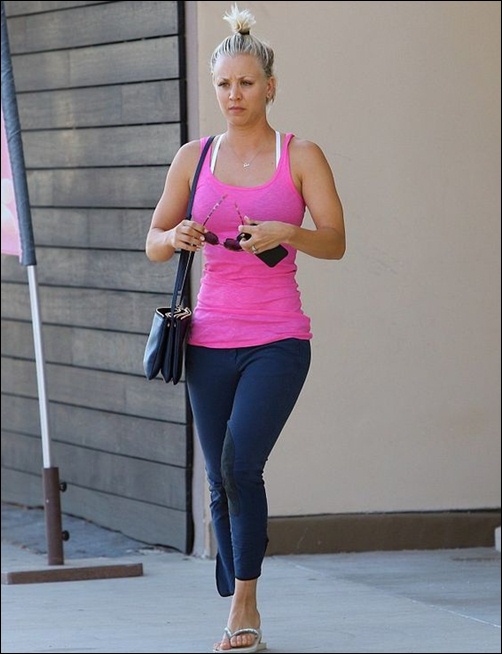 Cuoco always likes to stay casual and her fans love her even more when they see her in this casual dressing and with zero makeup look. Here, she has tied her hair in a pony and seems to be going out for some fun in her free time. 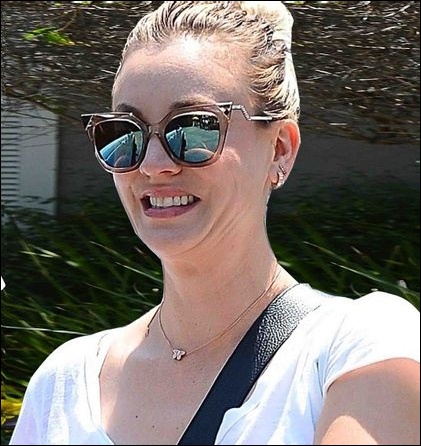 Cuoco has naturally clean skin and that’s why she considered that it is too time-consuming to get ready fully to just go shopping. But the media is always ready to snap a top star like her. Thankfully, she looks cute and attractive even without any makeup. 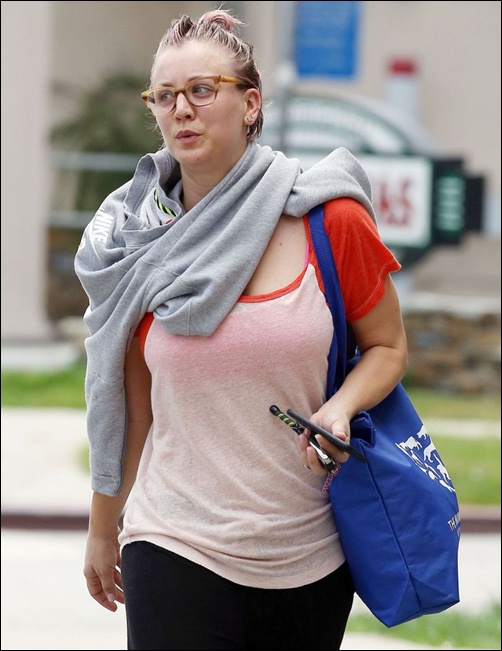 It seems like Cuoco just finished her workout and going back home. After her training session or yoga class, she is a bit sweaty. As there is no need to wear makeup while workout so she is totally bared face. Fitness is more important for her as compared to makeup looks.

Walking and soaking in the sun: 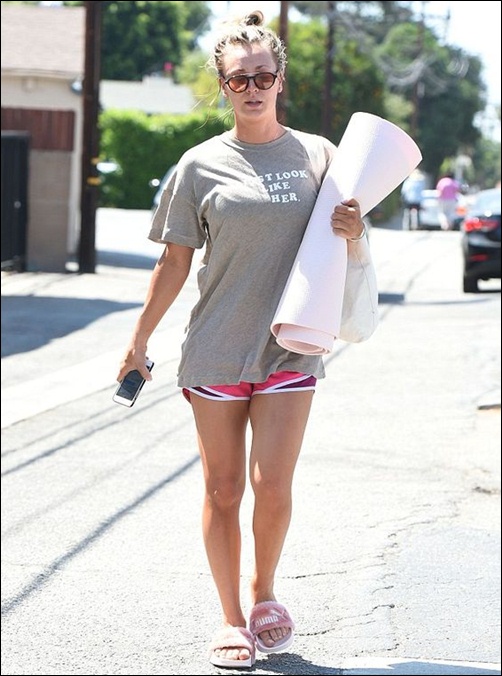 Although Kaley Cuoco is not prepared for the picture but still looks good in her comfy look. Her face is totally clear and no makeup is applied at all. She is enjoying walking and soaking in the sun at the same time with sunglasses on her face. It may not be her most suitable picture but still, she looks pretty as always.